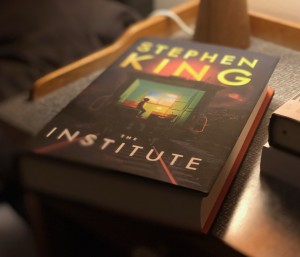 An airplane, a request that somebody give up their seat for a government agent. Tim
takes the offer and embarks on a hitchhiking trip, leading to a small town in South Carolina where there is work to be found for a former police officer such as himself. As a “night knocker”.

America. Nobody writes it better.

”They exchanged the desultory conversational gambits of mere acquaintances.”

As is common with King, the protagonist is an unglamorously decent person who treats others with respect and sees the good as well as the bad in strangers. Ordinary human interaction is the subject matter for much of the beginning of the book.

Less ordinary is Luke Ellis, a hugely gifted twelve-year-old. He is barely introduced before he is abducted by shadowy agents and finds himself in a windowless replica of his own room.

We’ve been here before. These are classic King elements, now condensed to acronyms like TK and TP, in a setting bringing both ‘The Shop’ and the dutiful creatures trying to break the beams in the Dark Tower series to mind. The Institute comes across as a dilapidated but brutally run holdover from the Cold War, dusty but deadly. As for the people running it, we are offered multiple perspectives and allowed an inside view into an organisation that the children they hold captive can only guess, or perhaps telepath, about. It is familiar ground but made more fertile by current events. Of course King gives Donald Trump a little swipe in passing early on, and it won’t be the last. As for a big theme of the book, imprisoning children, it is more than a swipe.

As for the technicians and doctors working in this hidden prison, they might consider themselves working bees only doing their jobs, or perhaps even doing Important Work, but when King lets a character muse that they may be ‘damned’ he’s clearly not letting them off the hook. Personal responsibility in the face of orders from above is another theme highly relevant for our times.

The kids themselves, preteens and teens, bond in their confusion and temporary shared misfortune. Temporary, because after a while they move on to another part of the institute. Taking steadily darker turns, The Institute feels painfully real when describing the often crude methods employed by indifferent or even contemptuous adults to get ‘results’. But when the attempts to increase his skill set to telepathy actually seem to work and Luke successfully hides this fact, he may have an edge. Especially when joining forces and minds with a few others. A thrilling escape attempt is the obvious next step, replete with the ordeals King usually provides for his protagonists. Success must never be cheap. The details about train yard logistics offered around the halfway mark are less thrilling, however, but it is endearing how King still finds new topics to research for his books. Keeps him young, I guess.

The scenes from the perspective of the people in charge of the Institute are both depressing and chilling, especially in “Back Half”. Where children are broken down and sent on. Where a grimy sign might dutifully proclaim:

“Remember these were heroes”

Dark. But there is also a sense of classic King adventure here, with a young protagonist facing perils that would give grownups pause – not unlike The Talisman.

Some two thirds in, The Institute has grown into the perfect thriller. Equal parts hope and fear, in two parallel story lines. The kindness of strangers and the petty greed of ‘stringers and uncles’. It’s a book demanding to be filmed, much like Under the Dome before its pitch black finale. Will this too veer into “too much darkness” or hold the course, a reader might be forgiven for wondering. For thinking “please just let these kids find a way to get out before …” Even if the work of the Institute should actually turn out to be vital.

I won’t spoil but I will say that there is the kind of chaotic shoot-out of which King is sometimes a bit too fond. But it doesn’t end there. Far from it.