“You tote your own burden in life” 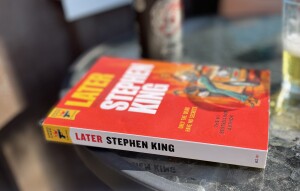 Later is the third King novel published under the Hard Case Crime imprint. Like Joyland, it’s written in the first person by someone trying to make sense of something that happened. This one, however, is set in the modern era, with smartphones and all.

As a kid raised by a single mother, Jamie Conklin discovers he can communicate with the dead. The ghosts usually move on in a little while, after becoming inaudible. He is told by his mother in no uncertain terms to hide his ability, which is presented in a mildly comical scene involving their deceased neighbour.

“They have to tell you the truth when they’re dead. I didn’t know that at the age of six; I just assumed all grownups told the truth, living or dead.”

Mrs Conklin is a literary agent fond of four letter words and wine. In the stock market crash of 2008, she loses most of her money. But when the writer of a series of books about the Roanoke settlement that have so far ensured them a steady income suddenly dies, Jamie’s desperate mother has an idea …

Yes, it’s partly another King book about writers. And yes, he has found another fresh angle. And the Roanoke settlement is an interesting topic worthy of a series of historic novels. It’s also funny, sympathetic and genuinely entertaining. At least at first. The roster of characters include a police officer named Liz who happens to be his mother’s lover. She gets wind of his gift and he tries to explain, not knowing what kind of person she will turn into.

“You get used to marvellous things. (…) There’s too much wonder, that’s all. It’s everywhere.”

There is terror here as well, though. A serial bomber named ‘Thumper’ is maiming and killing people at random and, desperate for a break, Liz thinks his ability may be useful here. But meeting a dead murderer is much worse than the ‘normal’ ones. And what if they don’t fade away? What if they hate you and decide to hang around, perhaps even making dark but deceitful prophecies?

So yes, it’s a horror story. A very Kingish one with little embedded flashes of wisdom and a main character with integrity. At 260 pages a short one, as King novels go , but with room for a reference to IT (‘the ritual of Chüd’), a terrible possibility and a dramatic final stretch involving Liz, a drug dealer and his opulent villa.

And perhaps many readers foresee the final twist. I must confess I did not. It’s a pretty bold one, and still quite low key. As Jamie puts it, it seems “laughably unimportant” compared to the ominous shadow looming over the epilogue. Ominous but not hopeless.

Later is eerie and thrilling but not profoundly disturbing. It’s also comfortably familiar, as King as it gets. He even quotes himself:

“Books are a uniquely portable magic.”

“When it comes to the past, everyone writes fiction.”

The melancholia instantly leaps off the page in this tale of youth, broken hearts and a rickety amusement park in North Carolina called Joyland. King’s knack for transporting you to a place and time, and a mood, is on full display. Written in the first person perspective, it recounts a summer and fall in 1973 during which Devin Jones, “a 21-year-old virgin with literary aspirations”, works as a carny while trying to get over a girl.

”Even when what you’re holding onto is full of thorns, it’s hard to let go. Maybe especially then.”

The writing is sympathetic and atmospheric, clear and uncomplicated; ‘this is what happened and how I felt about it’.  The start, where Devin visits the park for a job interview, is like an inverted version of The Shining. Nice people, spring around corner.

Spring turns to summer, work begins, and to a large degree this is a story about a good summer. One of those summers that shine in retrospect. New friends, a fascinating place. Even ‘wearing the fur’, dressing up as the park’s canine mascot to amuse the kids, suits Devin. Ominous comments from the fortune teller and a broken heart notwithstanding, this has all the makings of a great experience.

But there’s also the actually haunted horror house and the horrific tragedy that occurred there. And Devin’s inability to forget the girl and move on. He thinks staying on at the amusement park after summer will help with that.  A seaside amusement park in the fall. How very Morrissey.

Devin wants be changed by facing something otherworldly and courts an encounter with the apparition said to be haunting Joyland. In Devin’s befriending a young boy with a serious illness and apparent telepathy, the writer introduces another subject typical to King, but it’s toned down and actually not what you’re likely to remember best about the book. That would probably be the colourful portrait of the amusement park and its characters and the depiction of youth itself.

This is prime King. Wise, empathetic, crude, poetic, lively and eerie. Near the end it delivers themes more in keeping with the Hard Case Crime label (an imprint under which The Colorado Kid was also published),  but at this point it’s clear that King was never interested in writing just a murder mystery. Big surprise. It is ‘thrilling’ in surprising ways alongside the expected ones. Will a good deed work out for the best? That kind of way.

The finale, with its echoes of a scene from a famous movie not named here, and the touching epilogue confirms that this book really, really needs to be filmed. Done right, it would be wonderful.

As is the book. I would in fact describe it as the perfect antidote after reading Revival (published in the same year). There are some common themes (looking back from the sad vantage point of old age being among them), and Joyland has its share of violence and chills, but it also offers hope and beauty. Call me crazy, but I prefer that.

“Island living has a way of creeping into your blood, and once it gets there it’s like malaria. It doesn’t leave easily.”

This tale, published in the Hard Case Crime series and sporting a suitably pulp fiction-y cover which has little to do with the subject matter, might be called the kid brother of “From a Buick 8”. One might also say, without stooping to spoilery, that if you liked the latter you’ll likely to like this one – and vice versa, of course.

The nature of mystery is once more what King sets out to explore, for reasons he puts very well in the afterword. Two aged reporters on a Maine island tell their young, female apprentice-of-sorts about one “story” (insisting all the way that is in fact not an actual story) where the loose ends never really got tied up. A dead man found near a garbage can, a pack of cigarettes, cause of death seemingly not a crime.

Being a King tale, it’s not surprising that it also works as a written commercial on the beauty of New England and the quirky charm of the people there. An easy-to-read trifle that manages to be both frustrating and strangely fufilling.